Most IT professionals have either seen a demo of Windows 8 or have taken a few minutes to download a copy and test drive it. The reviews have been somewhat mixed, with most being favorable to the new UI and usually expressing confusion over the somewhat distracting method for running legacy Windows applications.

Make no mistake about it, Windows 8 is a significant paradigm shift for Microsoft. After failing to corner the slate computing market with Windows Tablet Edition, which has been available since XP, they are about to embark on a new UI that should provide tablet users with a much richer experience.

Make no mistake about it, Windows 8 is a significant paradigm shift for Microsoft.Unfortunately, in the process of doing this, desktop users are going to be impacted as a result of the redesign of the traditional Start menu in favor of a tiled main menu screen. Many of the start menu features that users are accustom to have been either moved to new places on the screen or eliminated entirely. This revised interface has been called Windows Metro UI or now simply just Window 8.

In many ways this is similar to the Unity redesign that Ubuntu Linux went through over a year ago. Unity is a revised application launcher menu for Ubuntu desktops, but it lacks the simple organizational structure of the previous launcher. As a result, many users are installing the old menu or switching to distributions like Mint that don’t support Unity. 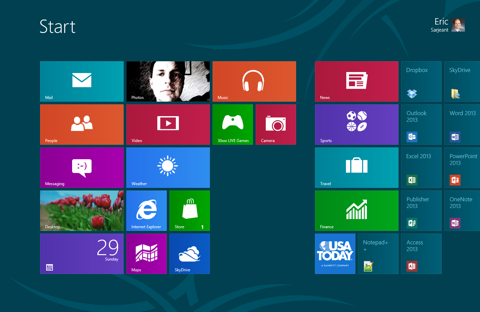 So how can Microsoft make their tablet redesign into a killer feature for desktops?

1. Restrict the new Start screen to “tablet” mode. Users would only see the new start screen when running a device in tablet mode. Once the machine is either docked or connected to a keyboard it would automatically switch to the standard Windows interface with Start menu intact.

This particular design choice would likely require applications to have two versions; one version that can run as a standard Windows application and another that runs from the new Metro UI.

2. Force everything to run in Metro UI. Use the API hooks for Windows to present a Metro style UI for all calls. For example, when creating an IFileDialog the Metro UI version would pop up instead. This would cascade all the way down to opening the main window for an application, and would in fact force your application to run in a full screen mode.

Obviously, Microsoft would need to handle cases where application windows are small or model, and of course somehow the custom screens that some applications present would need to be fully tested. Games would continue to work well as most of these are a full screen experience anyway.

3. Rely on the tablet hardware. This is another approach, simply rely on the fact that the new Windows 8 tablets are highly coveted and users will retrofit these to run other tablet operating systems like Android.

There are plenty of opportunities for the Metro style UI paradigm evident in Windows 8, but clearly Microsoft is going to need to arrive at a more cohesive approach across different devices.

As an experiment, I took advantage of a recent Microsoft offer for a free trial to run my website via Azure cloud services. At first glance, this appeared to be a good deal and could Read more…

When sharing h.264 (AVC) formatted video in an MP4 container, Windows Media Player may have trouble interpreting this format. In many cases it is simply the audio that causes the issue, but my general methodology Read more…

Microsoft has recently revamped what was previously their Reference Source Code Center to be simply Reference Source. This is a site for .NET developers who are interested in viewing the source code for the platform Read more…