There are quite a few kinds of malware that can infect your PC, and Windows Crashes Deliverer is among one of the tricker to extricate. It masquerades as an anti-virus application and in fact gives the appearance of a valid application, this malware is part of a relatively new class of malicious programs that can be described as rogue anti-spyware or scareware. For these programs, the objective is to convince you to buy it to protect your machine and in the process of doing so create the appearance of damage on your machine. 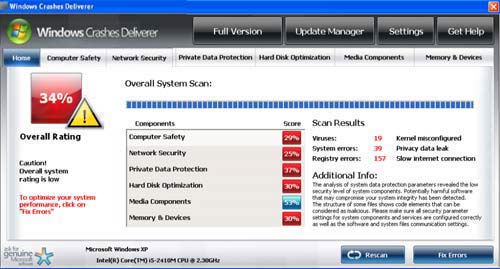 After this is installed on your system, it will take over your Windows desktop shell. As a result, when your computer restarts rather than run the standard Windows desktop you will be running Crashes Deliverer instead. This program actually creates a randomly assigned file name for the application and places that in:

Where [random] is in fact a random series of letters and numbers. Removal will require something like RKill to eliminate Crashes Deliverer from memory, I will explain in a little more detail how this can work.

It’s easy to see how you might get lured into running this program, it purports to be a trustworthy source for anti-virus protection. In fact, the only intention is to convince you to spend money on a program that will actually do nothing for you. If you do enter your credit card information, you should contact your credit card company and inform them of what has happened

As an experiment, I took advantage of a recent Microsoft offer for a free trial to run my website via Azure cloud services. At first glance, this appeared to be a good deal and could Read more…

When sharing h.264 (AVC) formatted video in an MP4 container, Windows Media Player may have trouble interpreting this format. In many cases it is simply the audio that causes the issue, but my general methodology Read more…

Microsoft has recently revamped what was previously their Reference Source Code Center to be simply Reference Source. This is a site for .NET developers who are interested in viewing the source code for the platform Read more…