When the door on my Toshiba SD-3000 started failing, it was easier to shop for a new player after getting almost 10 years out of it. The replacement Sony DVD player was a mere $75 and is now able to connect over HDMI to our TV. It has a fabulous picture when you are watching movies on disc and is generally more responsive then the older Toshiba player; unfortunately, it has the annoying inconvenience of displaying the dreaded Operation Currently Prohibited by Disc message. 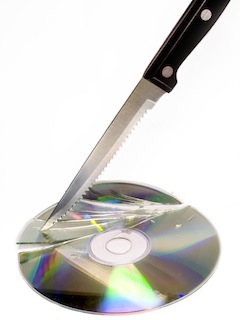 At first, this occurred most frequently when the FBI warnings displayed onscreen, the intention was to ostensibly ensure that you were aware of the legal repercussions of copying the media. This was a tolerable restriction, and it seemed fair that the publisher of the movie could assert their right to the intellectual property on the disc.

This has since extended to all of the previews that appear before the movie begins. So it is no longer possible to quickly skip through the previews at the beginning or for that matter to even jump to the main menu on the disc.

So you might think this isn’t really a problem, the movie studios have a right to advertise before they get to a main feature on the disc. After all, even if you purchase the movie you don’t own it – you are essentially paying a fee to license the viewing of the material that is on the DVD. The problems are in fact manifold:

None of these problems existed on my Toshiba player as it was built before any of these inane hardware restrictions were put into place.

If nothing else, this encourages me to hasten my migration to video on demand delivery of my movies over the Internet using services like Netflix, iTunes and Amazon Unbox. The movie industry has crippled their primary delivery platform, and since I’m sure that Blu Ray has the same unnecessary restrictions I’m even less inclined to consider any kind of hardware upgrade.

Fortunately, there is a solution using something called VLC and a computer with a DVD drive in it. When this is connected to my television, it is possible to control the DVD disc playback from my iPhone with VLC Remote. My particular configuration actually has a laptop without a DVD drive connected to the television, and the video is streaming from a desktop computer in another room. The menus in VLC allow you to jump to any spot on the disk (Title/Chapter), pause whenever you want and even replay a preview if that’s what you want to do.

The DVD industry could learn a lot from this is the kind of implementation, it actually works the way the consumer wants it to.