My last full-time Mac was a Centris 650, at the time I spent a lot of effort getting the Houdini 486 PC board running so that I could boot MS-DOS and possibly Linux. While Houdini never lived up to my expectations, the modern Mac is transformative in many regards.
Apple has put into the Mac many of the things that I would have spent time correcting on other platforms. So this is my list of stuff that I really like about the new Mac:

It’s UNIX. The terminal window shortcut is in the middle of my dock, that makes it easy to get to a UNIX command prompt and immediately take advantage of the full compliment of standard commands. Things like grep, diff, awk, sed and much more are at my fingertips. The work of reformatting my Vista computer to run Linux or trying to wedge my Houdini board into my C650 is no longer an issue, Mac now provides this natively. 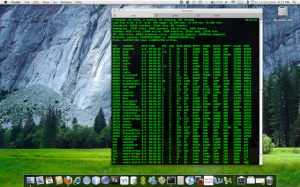 It works. Unlike other UNIX variants (Solaris, Linux, BSD) there is strong market share. Try hosting a GoTo Meeting on Linux or running SimCity on Solaris. There isn’t much that you won’t be able to run on Mac, and if you do really get stuck the capability of virtualization solutions like VMware will let you run just about everything seamlessly. In fact, my dock has an icon shortcut for Firefox, Safari and IE — the IE shortcut boots a virtual Windows XP instance and launches the application automatically.

Probably the best example of how well it works is the integration with Microsoft Exchange 2007 in OS X 10.6. After installing the update, a dialog prompts you for your Exchange email address and domain password, no additional information is needed for Mail to complete the configuration.

Applications are smart. An email arrived in my inbox today, it said something to the effect that I should keep my calendar open “next Tuesday around 11AM” and my Mac mail program figured out that this meant 10/20/2009 at 11AM. After hovering over the proposed meeting time, I was able to click on a menu option to add this to my calendar.

Zooming. I know this might sound trivial, by you can hold down the Control key and zoom in & out on the screen. This is especially handy if you are recording a presentation or giving any kind of demo to a group. Windows XP/Vista provides accessibility features, but they don’t have the same zero footprint.

Multi-Touch mouse pad. There is absolutely nothing like this on any other computer, the multi-touch mouse pad finally makes my laptop usable. It’s easy to scroll through documents using two fingers, jump to the top with three fingers or zoom into my photos. To make things even more usable, it’s possible to push down on the mouse pad and drag windows around lifting your finger up when you are done. 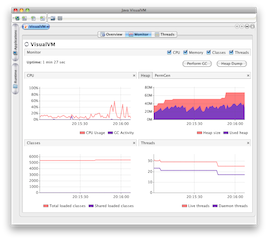 Java. I’m a Java developer, so it’s handy to have a JDK available. Fortunately, Mac ships with an excellent JVM along with some standard tools like ant. This makes it a full Java development environment without installing anything.

Battery Life. This is probably biased since I’m basing this off a MacBook Pro laptop; but the battery life on the Mac is so good you can almost forget about it. Obviously, you still need to plug it into the wall and recharge it but the laptop can run for almost 8 hours. I can go to work and leave my charger at home, yet I’ll still get through a whole day of work.

While there are some changes to the overall look and feel, the Apple user interface hasn’t changed all that much since 1984Power Management. Along with excellent battery life, the power management capability is transparent. My uptime right now is around 11 days — this is a laptop and I haven’t needed to turn it off for almost 2 weeks. Simply closing the lid puts the system to sleep and when the lid opens my computer is ready to go almost instantly.

Consistency. While there are some changes to the overall look and feel, the Apple user interface hasn’t changed all that much since 1984. This is still essentially a Macintosh and that makes it a pleasant departure from the litany of PC user interface.

Single menu. There is a single menu accross the top of the screen rather than a menu in every application. At first I thought it might be difficult to adapt to this again, but after using it for a while my PC screens (Ubuntu and XP) now look cluttered by comparison. The single menu provides more space for the application on the screen, and ironically this is something Microsoft is striving for in the ribbon bar placement for Office 2007.

Of course, no system is perfect and there are idiosyncrasies about Mac that I often find mind numbing. If you have been using a PC keyboard for a long time you will need to retrain your fingers for the Mac keyboard. Also, there are cryptic keyboard commands that you need to commit to memory (for example, a screenshot is Command + Shift + 4) but this list is relatively short.

So if you’re shopping for a new computer and maybe thought Mac might not be capable enough, hopefully my list has given you some ideas.