While the cost of storage has been in free-fall for as long as the PC has been on the desk, the principals behind storage have remained fundamentally the same. In most cases, personal storage is directly connected to your workstation and in networked environments a NAS or fileshare provides addressable storage over the WAN. Unfortunately, even large scale SAN’s don’t really provide true ubiquity of storage, and as such someone must pay careful attention to the integrity of the primary storage devices.

There has been some relief; for example, the open source project Moose File System (MFS) provides unlimited and fault-tolerant storage on your local area network. Combining this concept with something like P2P sharing would let users take unused local storage and make it available as a massive redundant pool of storage.

This is the idea behind Wuala.

Using the empty terabytes of data on your neighbors computers, you could store just about anything. Wuala takes a peer-to-peer network like Napster but uses this structure to make your files available. Anything you put on Wuala is available wherever you choose to logon and use it, to make matters even better you can increase your available storage simply by making your own storage available for others.

Data is secured using encryption, so the contents of your files are scattered accross other hard drives around the world but the actual contents of the data is encrypted and rendered unreadable on these other disks. 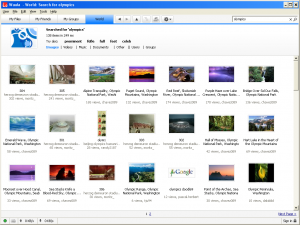 What is the benefit? Let’s say your computer bites the dust and you are forced to buy a new one. Imagine if Wuala was your primary document storage mechanism and all of your content was immediately available once you plugged in your new machine and connected to the network.

Since your file storage is now network addressable, this also means you can share directories with others who are on Wuala. This is a great way to collaborate on a project, or to immediately share photos with family and friends.

What are the drawbacks? In the current version, Wuala does not support native filesystem integration. This means that on Windows you won’t get another drive letter or any kind of direct connection to the My Documents folder. For this to become pervasive, Wuala is going to need to demonstrate this level of interconnected storage on Windows and Mac.

For those of you on Linux, it appears to be possible to mount the Wuala files as an NFS device:

Quite handy as you would be able to make your home directory a link to the same location on the Wuala server.

Wuala shows a lot of promise as a first version of a next generation storage mechanism. An enterprise deployment for storage in a corporate setting is the next logic step. Imagine taking advantage of terabytes of disk drives throughout your company to store documents and share them securely. Your server room might become a thing of the past as storage moves from expensive hardware RAID devices to cheap desktop storage on workstations throughout your organization.