It’s been a while since my last post, and during that time I have been busy playing some computer games that I haven’t looked at in a while. At the moment, Empire Earth and SimCity 4 are at the top that list. What is significant about this is that these are playable on Wine and they actually work.

Until quite recently, Wine has provided only limited support for Windows applications. Many things that didn’t function before now appear to just work. Probably the best example is Empire Earth, this has never even been installable on Wine but as of version 0.9.59 it can install and run successfully. There are no glitches to speak of, the introductory videos play without a hitch and the fullscreen graphics work flawlessly. Launching the program is as easy as double-clicking the icon from my desktop. 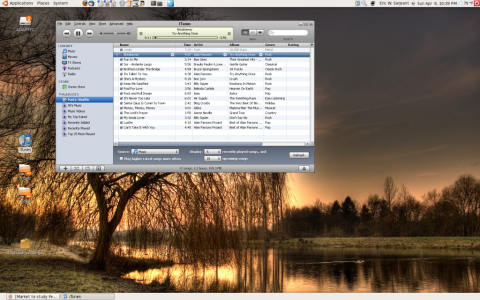 This kind of experience is no different from my Windows gameplay, but it means I don’t need to reboot to Windows in order to play any of my favorite games. As an added benefit, Apple iTunes seems to run just fine so maybe at some point my iPod Touch can sync without requiring a reboot to Windows.

There are certainly quite a few hurdles to overcome, even after you simulate all the Windows API’s there are proprietary copy protection schemes that complicate matters even further. Today, however, the majority of games play fairly well and most major applications provide reasonable functionality. For example, if you wanted to run Microsoft Office on Wine that would certainly be an option.

Why does Wine matter? If a new desktop platform is going to replace Windows, an emulation layer like Wine is needed. For that matter, even Microsoft does a certain level of emulation (Windows on Windows) to make newer versions of Windows backward compatible. At some point Windows will be obsolete, and we can choose to run it in emulation using a virtual machine (VMware, Parallels, VirtualBox, etc.) or simulate the windowing API’s with a portable framework like Wine.

For the average user, since Linux desktops already have a rich compliment of productivity software the Wine application means that you can also run your Windows games without needing to reboot. There is a lot to be said for this, kudos to Wine and of course Google for helping to make this project the success it needs to be.