We are able to easily communicate with one another because of natural languages. These methods of verbal and written communication are shared between us as our primary mode of interaction, and without language we would be forced to resort to symbols and drawings. In many ways, this is how the modern computer expects a user to interact with it.

Before graphical interfaces, we were forced to learn another language, and while it was highly structured it did require a certain amount of expertise to learn how to use it. The GUI allowed anyone to start using a computer presumably without having to learn a language. Early versions of Microsoft Windows introduced the concept of a program manager where installed applications could be found as icons and text.

When Microsoft Windows 95 came out, the idea of a Start menu was promoted. This would be a navigational element where everything on your system could be easily found. 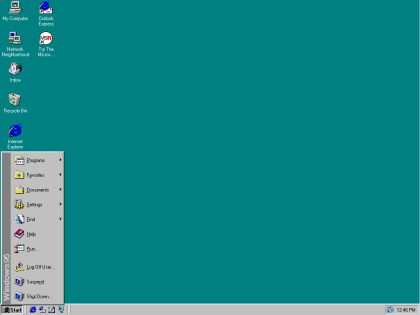 It really made a lot of sense, users wondered what they should select to get started and it became as simple as locating the navigational element titled Start. Contrast this with Apple Macintosh where the apple menu was one of the primary navigational cues, and if this didn’t show you what you wanted you were forced to click through your hard drive until you found it.

Since then, the idea of a single start menu has evolved into a cryptic Windows menu:

“There is no reason that the word start should be removed from the Start menu on any Windows operating system.”How do you know where to find the main menu? There is no label for it, although if you happen to have a keyboard with a Windows key on it you may make the association that your Windows key will activate a menu with a very similar graphical depiction of the Windows logo.

Contrast this to the menu from the popular Ubuntu Linux distribution:

On Ubuntu, it is extremely clear what each menu is used for. The menu labeled Applications is intended to serve as a shortcut to your programs, Places navigates you to alternate locations (disks, devices, etc.) and System provides core configuration and user customization. Where do you find any of these in Windows Vista?

Apple has learned a little and now provides a CDE inspired dock at the bottom of the screen where users can find common application icons and shortcuts. Expandibility of the Mac OS X dock is somewhat limited, and while they have incorporated visual queues similar to the CDE drawer concept they are missing anything like the Windows Start menu or the Ubuntu Applications menu.

Microsoft should revisit the new Windows Vista menu. While users can customize this to provide a visual appearance similar to the legacy Windows 95 look and feel, this is not something that can be easily accomplished without first learning the updated navigational elements. There is no reason that the word start should be removed from the Start menu on any Windows operating system, this is exactly the kind of thing that will prevent technology workers from supporting this environment.

“It’s tricky enough to help users solve computer problems, now we need to educate them on the marketing logos…”When we could convey the commands to type in a DOS prompt for performing certain operations, it was awkward for the user but at least they could perform the operation once the commands were properly communicated. With Windows 95, we had to introduce the idea of finding a menu called Start, but at least this had a label on the screen and could suitably describe the menu in one word.

With Vista and to some extent Mac OS X, these visual navigational elements are missing. How do you describe to someone they should select the menu in the lower left-hand corner of the screen that looks like a Microsoft Windows logo? If they are staring at a Mac OS X dock, hover over each of the icons until it says Safari and this is your web browser.

It’s tricky enough to help users solve computer problems, now we need to educate them on the marketing logos for popular products and provide a usable definition for words like hover. On Windows 95 it was easy; open the Start menu and select Programs, in there you will find a folder called Accessories and it has an icon link for the program Notepad.