Let Go of My Tivo

The Tivo is a modern marvel, you can easily timeshift your favorite shows and watch them on your schedule. It’s all smooth sailing until your 40GB hard drive isn’t able to hold all those Seinfield episodes you keep meaning to watch. What’s a user to do?

“Why should we be restricted from viewing a video that we have recorded on our own hardware?”If you have a Windows or Mac computer, you can download the Tivo Desktop software and transfer those episodes to your PC. With the price of 250GB falling below $100, it’s relatively inexpensive to add some storage to your computer and offload your Tivo episodes. Recently this has been rebranded as TiVoToGo, and additional compatibility has been added for portable media devices like the iPod, PSP or Creative Zen.

What about the scenario where you want to transfer a TV show to a DVD and watch it later? Well, as it turns out, if you have a Roxio product for DVD burning then this shouldn’t be an issue for you. Otherwise, you might want to take a look at Galleon with tivodecode. 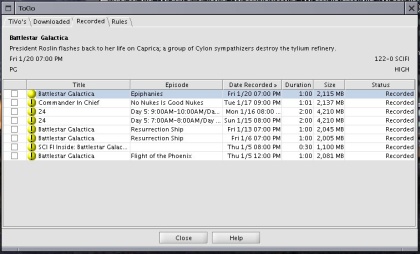 Using Galleon it is possible to get the proprietary .TiVo video files off your PVR and onto your computers hard drive. Unfortunately, this isn’t enough to let you watch the video since TiVo has decided that the video media on your own PVR should be protected from you accessing it anywhere else. As a result, on TiVo Series 2 and later the .TiVo media files are encrypted and you will need to use tivodecode with your media access key to decrypt the contents of these files.

Once decrypted, the files can be used as any standard MPEG-encoded video file could be used. Programs like DeVeDe or DVDStyler will allow you to layout a DVD disc containing the videos converted from your TiVo. It seems like a simple task, and one would think that TiVo might have considered rendering the video content in a format that was DRM-free. Why should we be restricted from viewing a video that we have recorded on our own hardware? This certainly makes alternative products look much more attractive, and it may mean my TiVo Series 1 upgrade looks more like Microsoft Media Center.