It is an FCC requirement for cable companies to support CableCARD. The idea behind this is a consumer can purchase their own set-top box (TiVo or Windows Media Center) and use it interchangeably with different cable providers simply by plugging in a CableCARD adapter. In other words, it frees the consumer from a limited selection of hardware the cable companies have traditionally offered and allows you to purchase your own home media center and record anything you want.

As it relates to HDTV, this is where things get a little complicated. If you have basic cable and your TV has a QAM capable turner then you won’t need CableCARD to watch HD television. That’s a good thing, since you can’t get a CableCARD without something called Digital Cable. Unfortunately, the cable company chooses to rebroadcast the basic HD channels (ABC, CBS, NBC and PBS) on a different channel so it is impossible for a DVR to know where the channel is located. 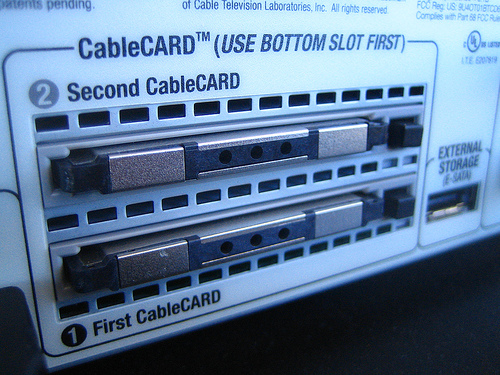 You might think all you need to do is go out and buy a CableCARD, but this is not the case…This is where the CableCARD comes into play again, it provides the mapping between the cable channel and the original broadcast channel – so while you don’t need the CableCARD to de-scramble the signal for you, your computerized device (TiVo or Windows Media Center) won’t know how to find the right channel without it.

You might think all you need to do is go out and buy a CableCARD, but this is not the case. Your cable company is the only one who can provide you a card for their network, so you will need to go back to them and ask for one. This is what we did.

That’s when you’ll find out you need to upgrade to Digital Cable to get a CableCARD, at which point your cable TV bill will more than double and they in fact will throw in a complimentary DVR. Why would I want to do this? We already have a DVR and I’m already receiving the HD channels I want – the problem is they have relocated the channels so there is no way for my DVR to know how to record without a map from them.

Very confusing. Why is it like this? Simple – by relocating channels it means the cable company can charge you more for cable TV and provide you a bunch of service you don’t want in the process. So they sell you  stuff you don’t want to get you the one thing you do need — a CableCARD.

Fortunately, on our wonderful HDTV set with our new HDTV capable TiVo Premiere we can enjoy our shows over cable using analog signals. Of course, these are the old NTSC formatted broadcasts which are interlaced at 410 lines and have a significantly degraded signal quality when compared to the 720p HD signals we can receive from our local broadcast TV stations.

Now this is where things get really muddy. Most DVR’s can continue to interpret the analog broadcasts while the cable company provides them, Assuming our cable company completes this digital transition, my TiVo Premiere will be useless in about a year.and without a CableCARD or an antenna this is really your only option. Unfortunately, the FCC mandate to rebroadcast analog signals will expire in 2012 and it only applies to local channels you would normally receive over the air. In other words, channels that do not have a local origination can be turned into digital-only any time.

This is already happening.

What does this mean? Well, once the signals are digital your analog tuner will be unable to receive them. Simply put – there won’t be anything to watch. Assuming our cable company completes this digital transition, my TiVo Premiere will be useless in about a year as it will no longer be able to pickup analog signals from the cable company.

Since an antenna is not an option for us in our community, this will leave us without the ability to record televised programming. It’s amazing to me that something which could easily be done thirty years ago using a VCR will be taken away overnight by a cable industry passionate about profits and yet indifferent to the needs of their customers.

Until recently, my iTunes media has been trapped on my PC without any easy path to my television. Apple offers some great solutions, using an AppleTV or connecting a Mac Mini to my big screen Read more…

Home Movies for Your Tivo

We recently upgraded from a Philips Tivo Series 1 to a new HD model with networking and the ability to record HDTV. Using iTivo on my Mac it was pretty straightforward to take some TV Read more…